The one hour trashbug challenge

'Hey Stevyn!' said one of my social media chums recently. 'How long does it take to make a trashbug?'
'How long is a piece of string?' I replied.
'Twice the length of the halfway point to one of the ends,' said my smartarse chum. 'But seriously - how long?'
It's a tricky question to answer. But it's an important one to address because it dictates the cost of my finished sculptures.
People often moan about the fact that art can be expensive.
'My five year old could have done that!' they say as they stare at a scribbled abstract painting by Cy Twombly that is valued at $60 million.
Yes, but they didn't did they? 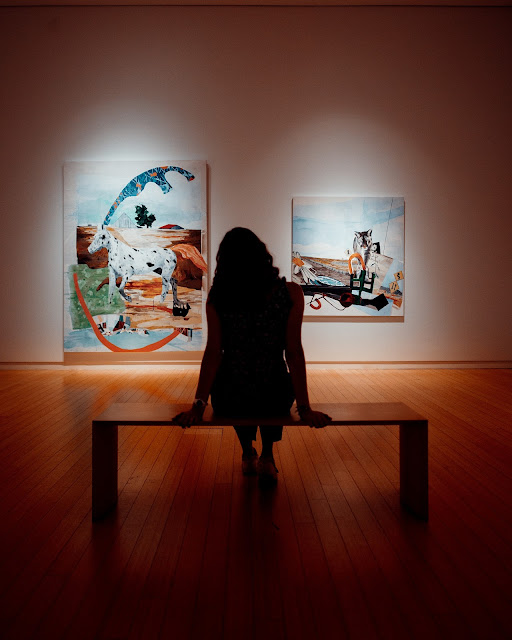 Photo by Blake Cheek on Unsplash
I'm not in Twombly's league. But my sculptures can still cost hundreds of pounds.
'But your stuff is made from throwaway free junk!' say the critics. 'How can you justify your prices?'
It is true that plastic packaging costs me nothing, other than what I paid when purchasing what was originally inside it. But every sculpture does cost me time and effort. And time is money.
The National Minimum Wage is £9.50 per hour (as of 2022). Let's imagine that's all I charge my customers, plus 50p to cover the cost of materials like glue, varnish and paints. £10 per hour is a nice round figure to calculate with. And let's also say that I only charge for assembly and painting time. I don't charge for the hours spent waiting for paint and glue to dry - even if I do often engage in holding a heat gun over a model to speed things up.
So, what could I make you for a tenner? What can I achieve in an hour? I thought I'd try to find out.
So I set a timer and off I went.
As I was on the clock, all I could afford was a very quick rummage in my junk boxes. Making sculptures from junk isn't like making a Lego kit where you have bespoke cast pieces and a set of instructions to go by. Trash bashing or scratch building means having an eye for certain shapes and seeing their potential. Then you have to see how they fit together, which can mean modifying them by cutting pieces away or altering their shape with knives or sandpaper or even fire.
I found the spray mechanism of a kitchen bleach bottle and pulled it all apart. I used the top panel and part of the trigger to make a body and head. I added two small plastic bearings for eyes and some balsa wood offcuts for jaws. Then I broke some tines off a couple of plastic forks and made legs by bending them over a tealight candle. I made the slightly longer rear legs by melting and fusing two tines together for each. Then I gave it a spray of white primer.
I checked the clock. I'd already passed the hour mark by eight minutes. Here's what you get for a tenner at minimum wage level. It's very simple and it's small - it comfortably fits in the palm of my hand. 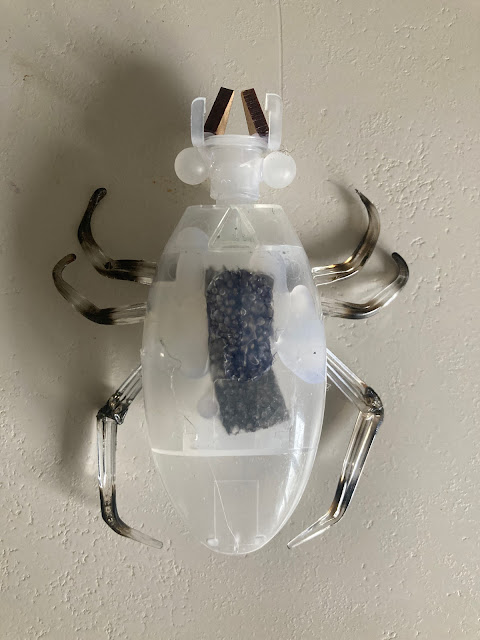 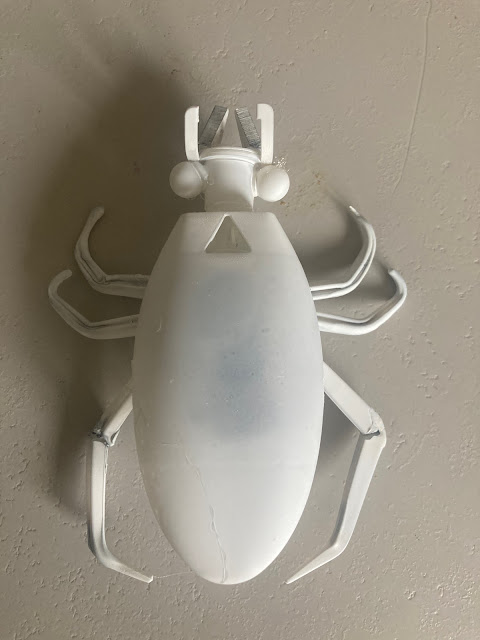 Out of interest, I decided to carry on.
I gave the body a coat of ladybird red and painted the head and legs black. I also painted 6 googly eyes to later use as spots. 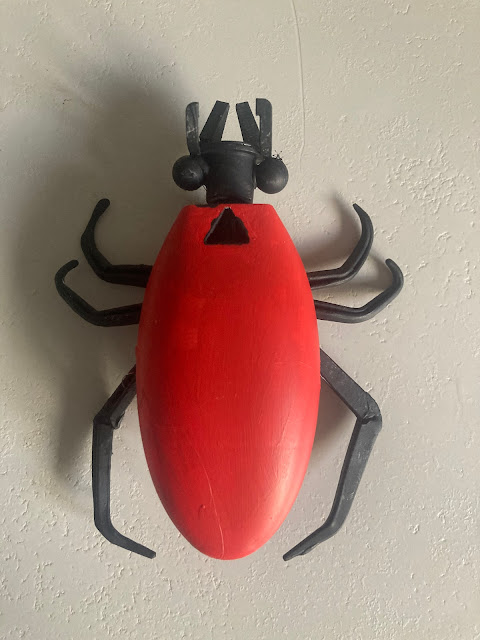 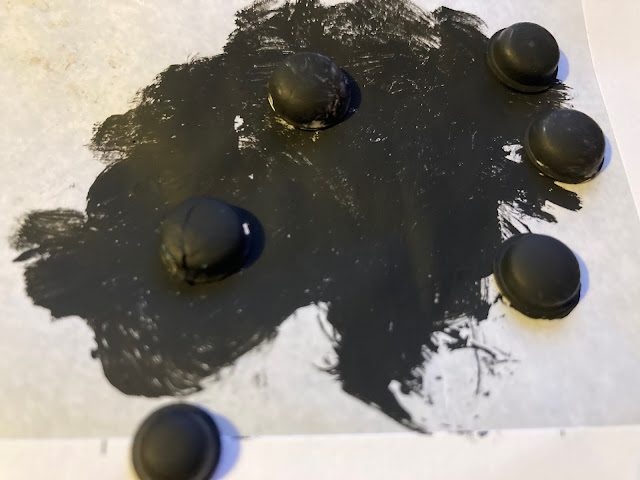 Now, I could have just stuck that all together and called it done at the 90 minute mark.
But that isn't what I do. I make my insects look like machines. That means adding some more detail and a paint job to match.
I therefore added some googly eyes for joints, and a piece from inside the spray bottle trigger as an exhaust vent. I then painted them before adding layers of ink washes, dry-brushed metallic paints and fake rust (grated chalk pastels mixed with paint) to create texture and to give the impression of weathered metal. 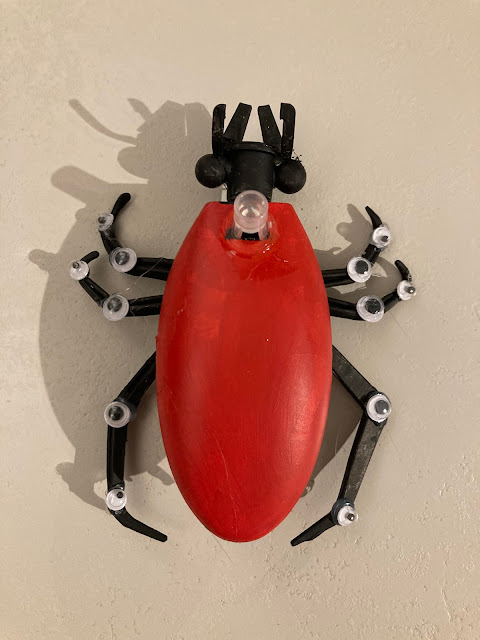 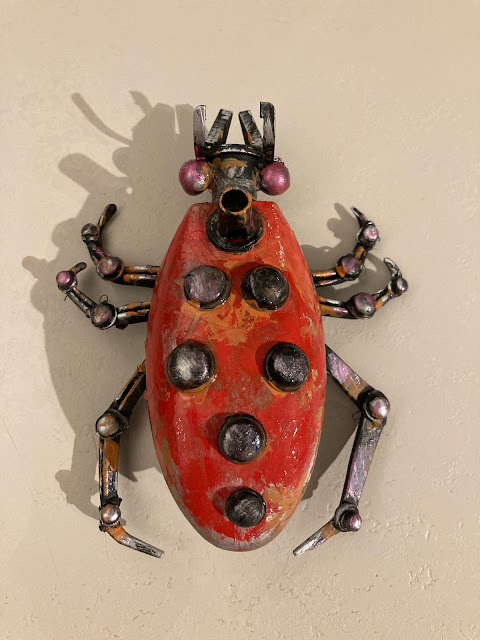 I was now at the three hour mark and nowhere near finished.
I'd been working as quickly as possible. Which is why, even after three hours, it doesn't look great. It's rushed and clumsy and not even close to my usual standard of work. And yes, I realise that a ladybird's spots don't work like that as the body should have a central split to form the wing cases. Durrr. One absolute certainty with this kind of assemblage art is that you'll discover things that don't work along the way. It's a constant problem solving exercise and you will frequently change things or try doing them a different way in order to get the best possible result.
However, here's the point.
Even working for the minimum wage, I would need to charge around £30 for this small below-par bug.
But I don't work for minimum wage.
Most professional technicians - like plumbers, electricians or car mechanics - earn, on average, around twice the minimum wage. Many earn a lot more. You're not just paying for their time but for their expertise too. It will have taken them years, and quite a lot of money, time and effort, to get good at what they do.
Artists are no different. They have hard-earned skills and knowledge ... and they have to pay bills too.
So my shoddy little unfinished ladybird should actually cost you around £60 at least. Or even more. It is unique, after all.
'Sixty quid?!' I hear you cry. 'But all you did was stick some bits of plastic together and paint them!'
Yes I did. And you could do the same. In fact, I actively encourage you to have a go because making art is always a good and positive thing to do.
But you will find that it's not as easy as it looks. It takes time to develop an eye for seeing potential in the junk. Practice will make you better at doing it. You can also learn the various painting techniques and the pros and cons of using certain adhesives with different forms of plastics - but that takes time too. And you'll start to get a sense of why I, and other artists, charge the prices that we do.
We're simply asking for a reasonable return on the time and effort we've put into making art for you.
Most of my creations are a lot bigger that this ladybird and certainly a lot more complex. My recent dragonfly took over 12 hours to construct and paint. That's why my sculptures usually cost between £100 and £300.
So there you go.
Thanks for reading.
Oh, and I'll post a photo of the ladybird when I've made a better job of it!
I can't leave it like that ...
on February 10, 2022 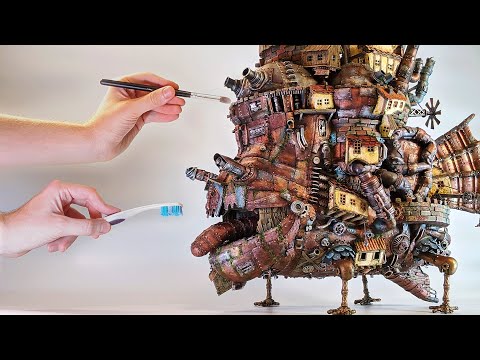