The Owl and the Pussycat

Having thoroughly enjoyed making a bunch of junk owls recently I was reminded of this painting I did back in 2010. 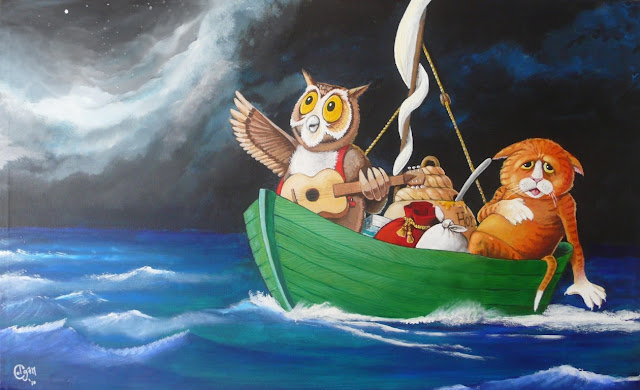 Edward Lear's The Owl and the Pussycat is a much-loved poem and many thousands of illustrators have put their individual stamp on it. I added my own comic spin - knowing cats' aversion to water, I decided to make mine suffer a little mal de mer.
Feeling inspired, I decided to build an Owl and Pussycat diorama. The main figures could have a metallic steampunk look to them. The pea green boat could also be made to look industrial and constructed from steel. And it would be fun making the miniature props - the guitar, the honey jar, and money wrapped up in a five pound note etc. I might even attempt a runcible spoon.
So, first, I started on the owl figure, which was made mostly from mobile phone components and plastic cutlery wrapped around an XPS (expanded polystyrene) core. I used washers and laser-cut MDF cogs for the eyes and Covid 19 testing kit pipettes (suitably washed and sterilised after use) for legs. I then gave it a coat of black matt primer. 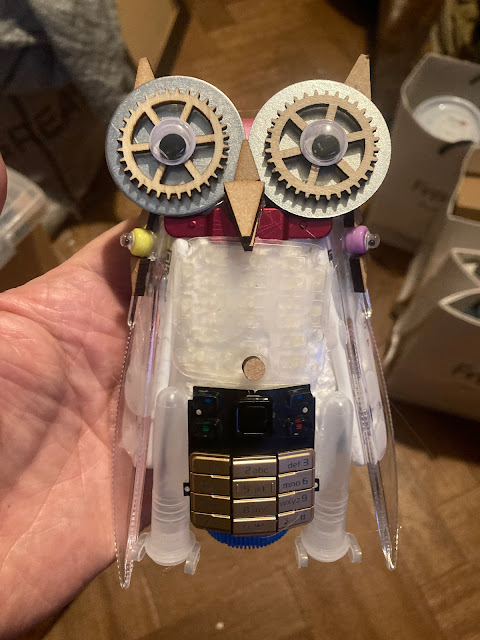 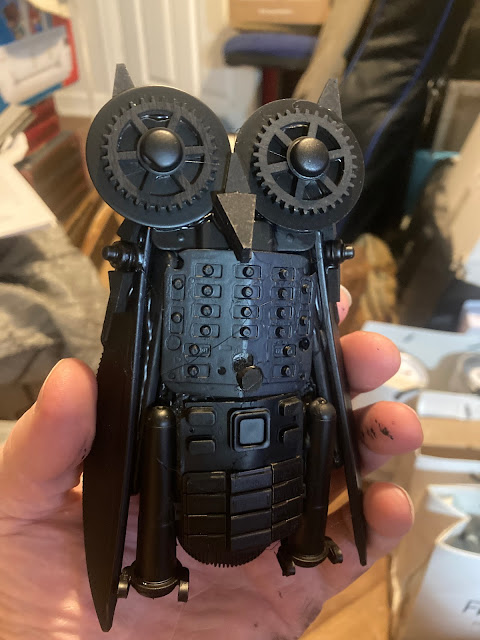 Oops! Guess who forgot that spray paint melts XPS foam! You can see the effect it had under that grill area. 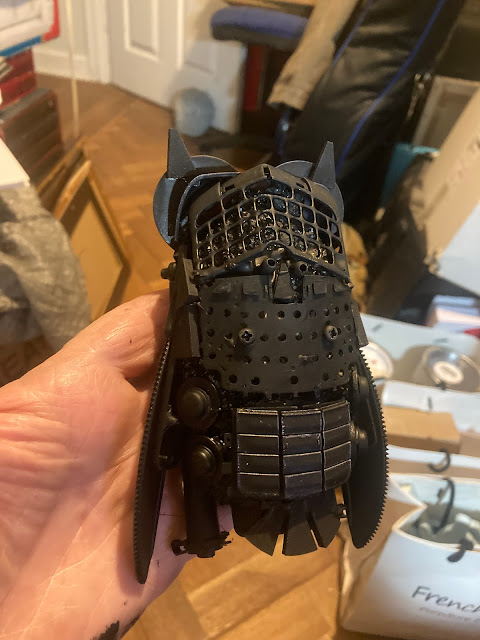 Ah well. Accidents happen. And I'm choosing to go with the idea that the texture probably adds to the final effect! But, to make sure it didn't happen again, I sealed it with a coat of matt varnish before the rattle cans came out again to (carefully) spray the owl a metallic gold. 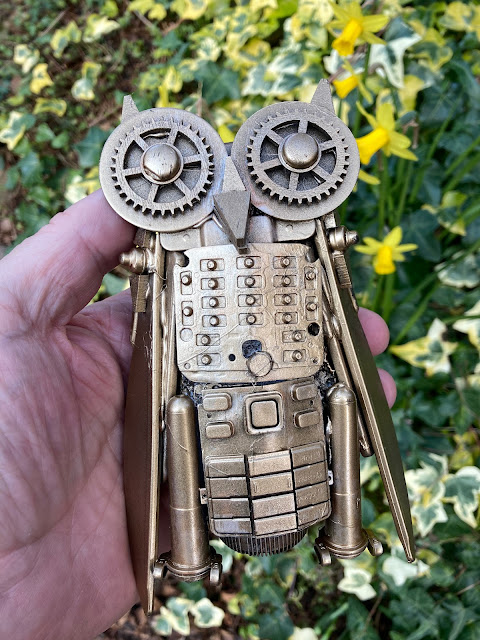 Now, onto the boat.
I made the basic structure from foamboard. I deliberately chose to make it short and chubby (a) because it would take up too much space if I made it a normal boat shape and (b) because it would look foreshortened anyway when viewed from the front. I cut out the base and worked out the shape of the sides by experimenting with card. Once I had my template, I made the sides and attached them. 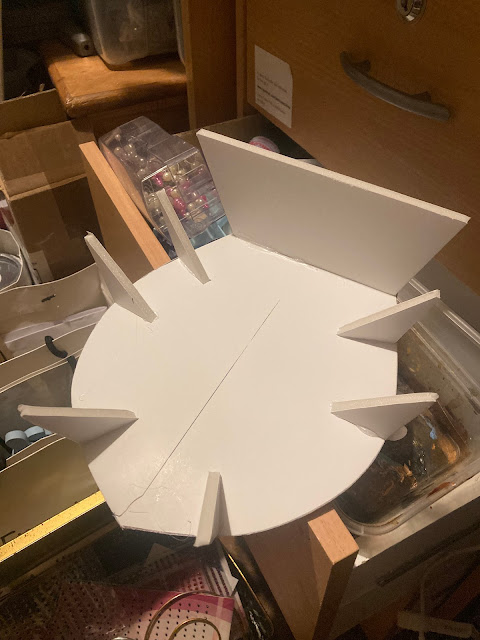 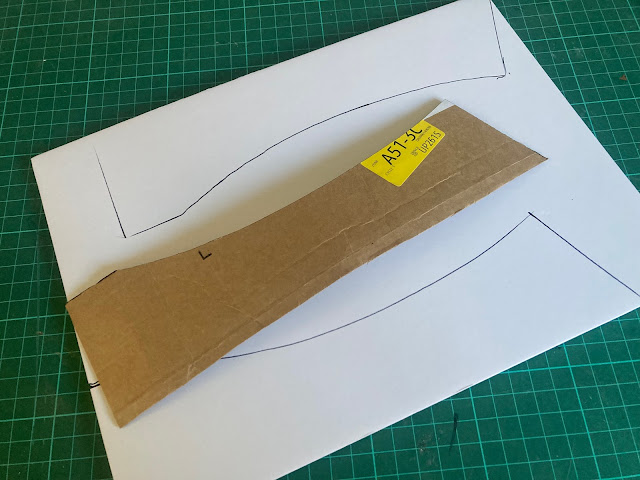 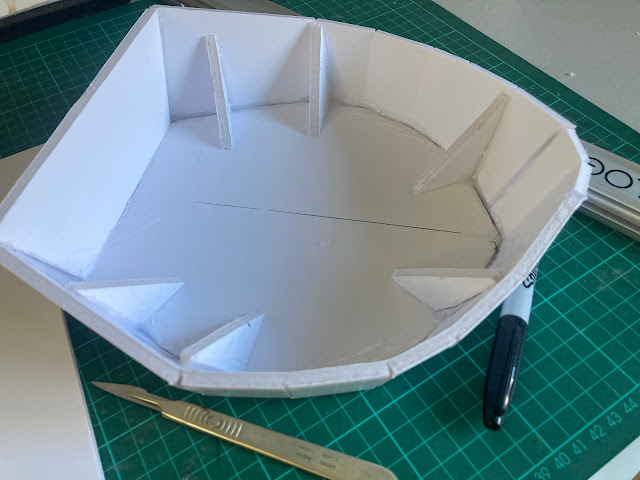 I filled the gaps with what Americans call 'spackle' and what we British rather more boringly call 'filler', sanded it back and then decorated it with foamboard panels (as if the boat has been clumsily repaired) and then added dozens of plastic rhinestones - of the kind used in nail bars - as rivets. A few coats of paint, some ink washes and metallic dry brushing later and the boat was coming together. 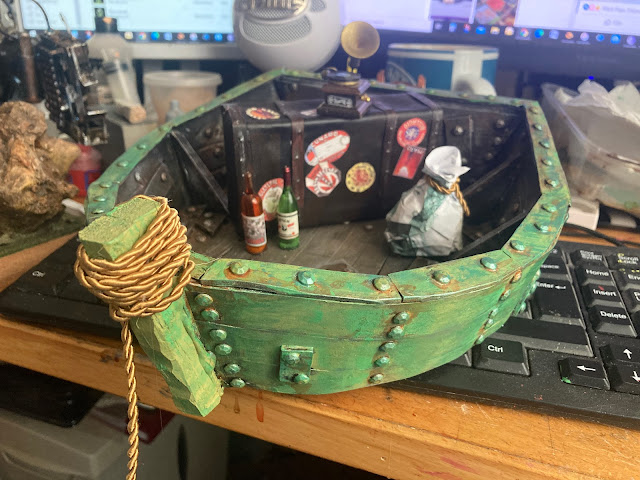 As you can see, I'd started on some of the props too - but more of that later.
Now for the pussycat.
The body was made from  jelly and yoghurt pots and a plastic disposable wine glass. The head is an old three pin electrical plug. I began forming the face from bits and pieces in my junk boxes, including a couple of old plectrums (plectra?). 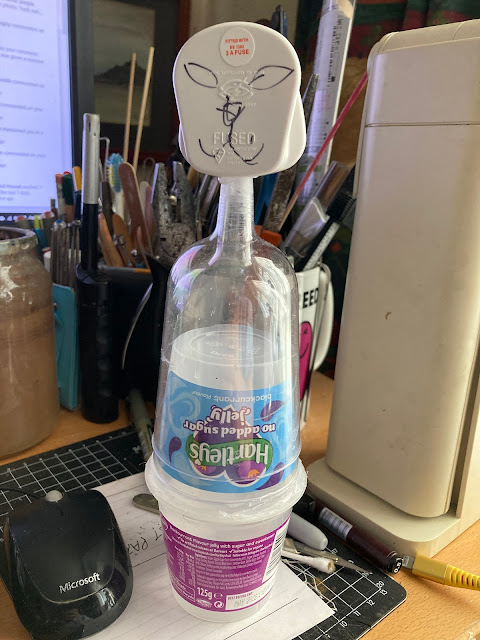 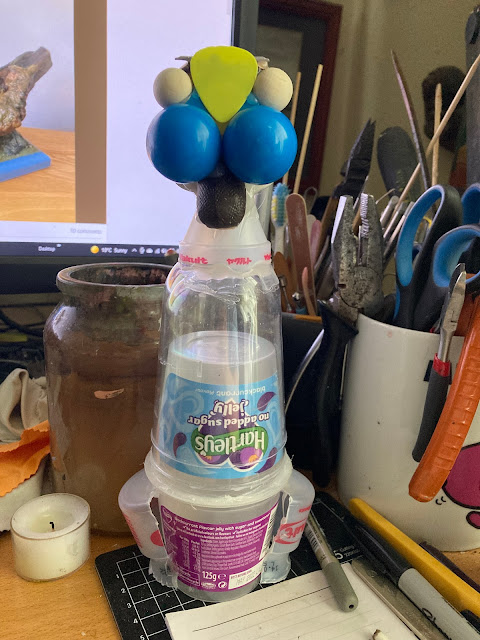 Then, several hundred mobile phone components and plastic forks later, I had a pussycat. 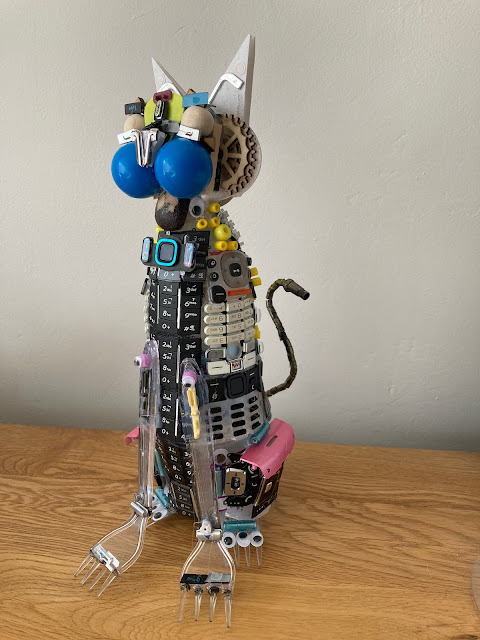 I sprayed it with a matt black primer and then drybrushed it with metallic silver and blue. It looked okay ... but something wasn't sitting right with me. So I put the cat away for the moment and concentrated on some props. 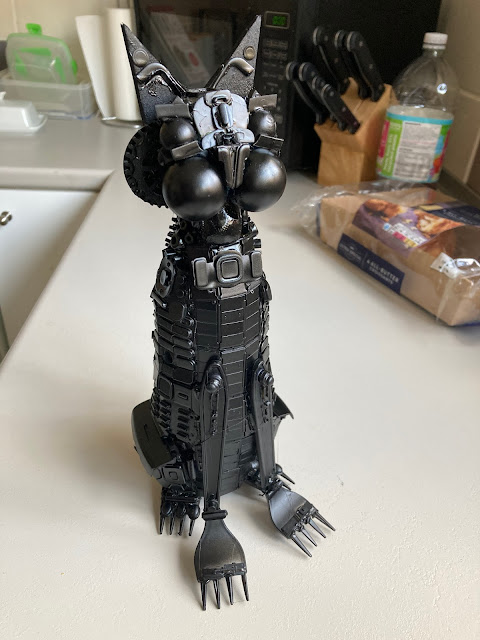 I figured a metal owl required a metal guitar so I made a classic 'Flying V' from foamboard and plasticard. I made a travelling trunk from leather (rescued from a dumped sofa) wrapped around an old medicine box with plasticard metal bands. The 'plenty of money wrapped up in a five pound note' was made simply by finding a photo of a fiver online, printing it off at around 50% larger-than-life size, cutting it out, and wrapping it around some scrunched up tissue. And, of course, I sculpted a pasty in Milliput. Plus I had some prop wine bottles and a gramophone rescued from an old doll's house that looked to be the right scale. 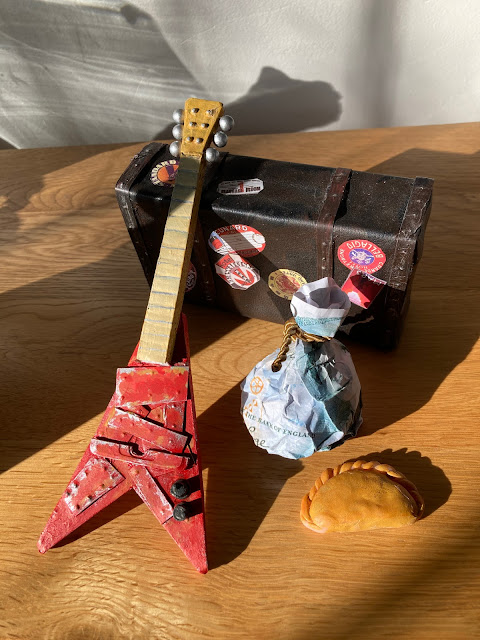 I assembled it all ... and then spotted what was niggling me about the pussycat. It was just too tall. 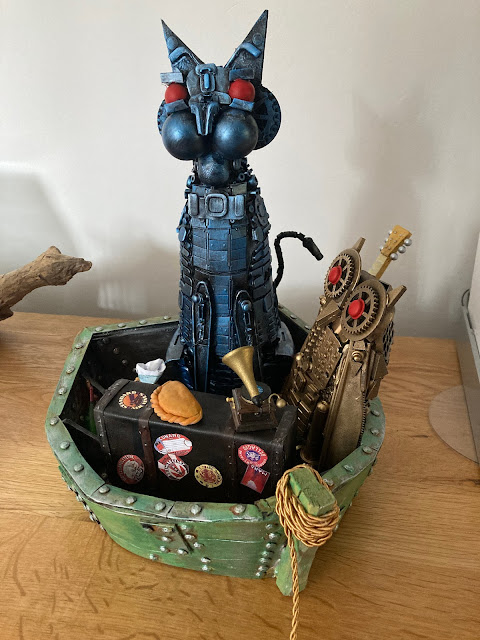 So, out came the hacksaw and the greeblies to hide the new join ... 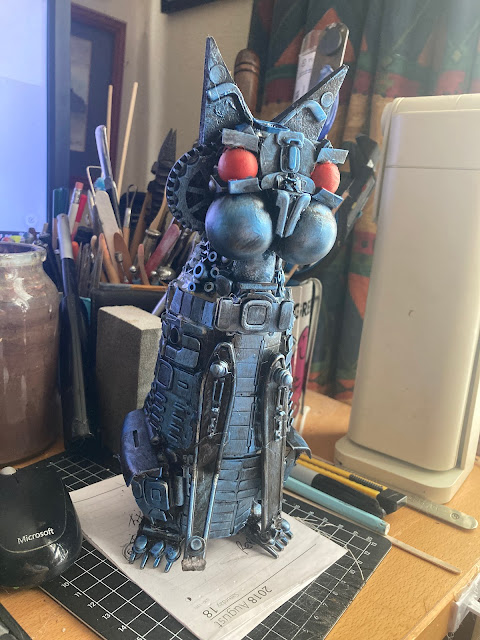 And, while I was at it, I replaced the front paws which were also far too big.
A bit more painting was needed so I got on with that.
Voila - we're done. 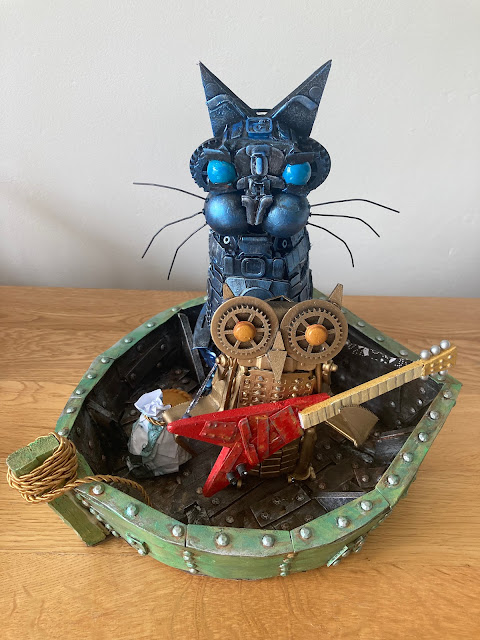 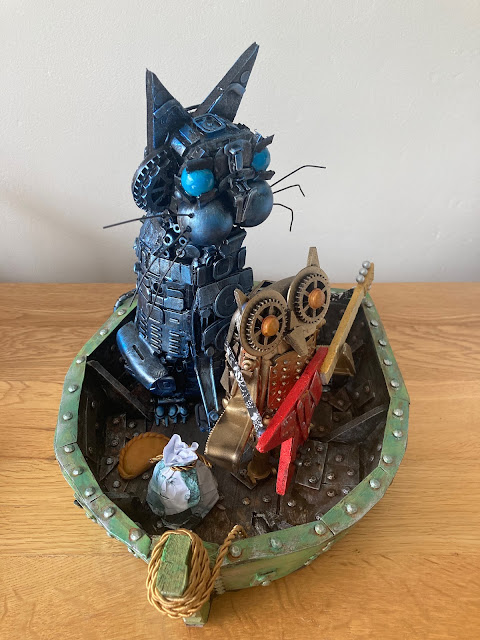 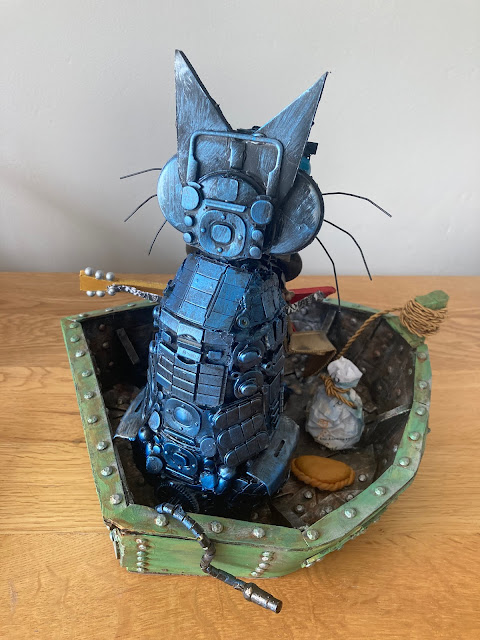 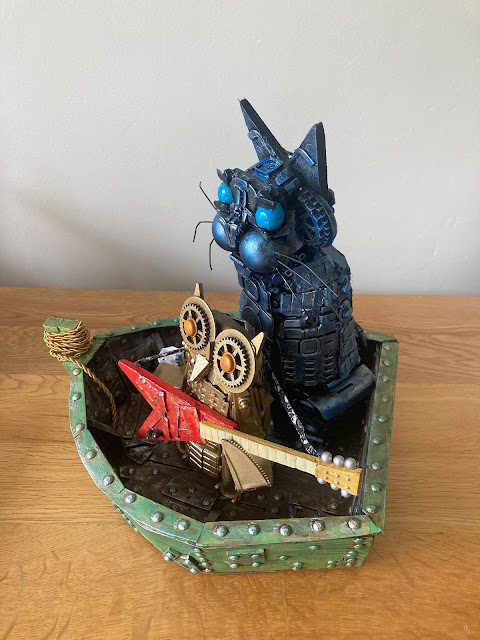 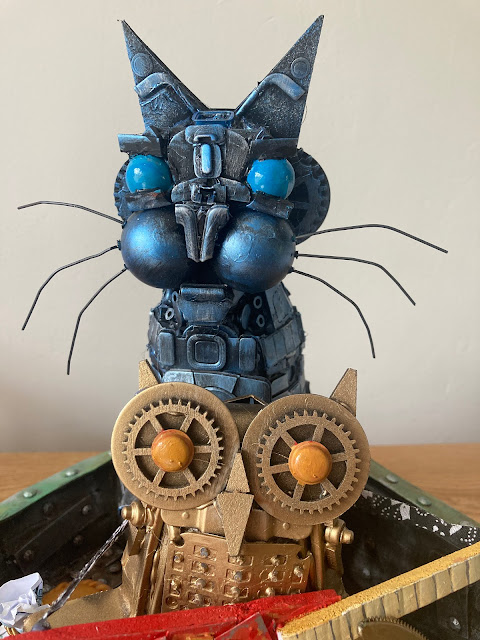 As you can see, I decided to leave out the travel case, gramophone and bottles as it just looked too crowded.
But dammit!
I forgot to include a honeypot. And a runcible spoon.
Ah well, I can always add them later.
on April 15, 2022 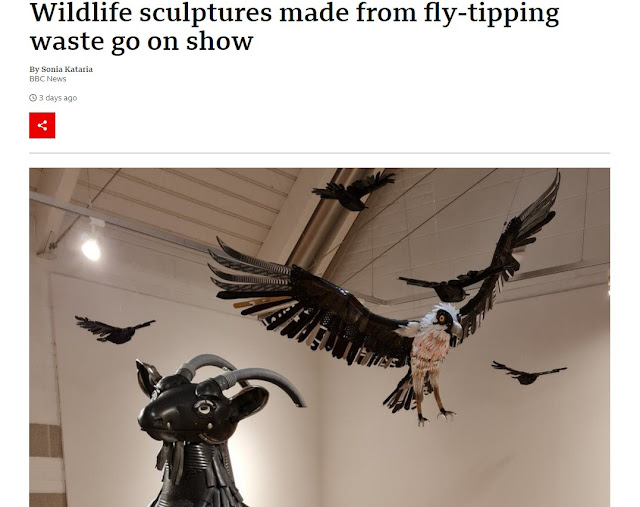